Recently I was sitting on my back porch, watching the sunrise, and tuning in to the language of the birds around me. Bird language is a little different than typical bird watching or bird identification by song. Bird language is a three dimensional practice of being aware of not just who is out there communicating, but what the landscape is telling you through the soundscape. Among other things, it teaches you how to detect alarms in the forest of approaching danger, well before you actually see or encounter it.

On this recent morning I heard a whisper song that I had never detected before. What's a whisper song? Most people are familiar with bird songs. But there is a subset of birds that have an additional, much more subtle addition to their playlist- the whisper song. These are very quiet, almost murmurings of songs, whispered by a few birds.
I had first learned of whisper songs while doing bird surveys in Hawaii. I was part of teams that would annually trek from the tops of volcanoes, through thick impenetrable fern covered native forests, all the way to the ocean in some cases. We would stop at designated locations, listen, then record the species of birds we heard. Many of these birds were endangered. Some have since vanished from the planet. Some sang very stealthy whisper songs. These were the hardest to detect. Imagine a recording of a squeaky wheel on a grocery cart, turned down to the lowest volume, and played 100 meters away. That's how challenging it was to hear these songs.
I had forgotten about whisper songs when I moved to California and changed professions (to become an educator). Then, one day I was sitting in my backyard watching my son try to lure a local Scrub Jay to come down and take a peanut off his head. That's when I heard a quiet murmuring of a whisper song behind me. To my surprise, there was a Scrub Jay, perched on the roof, looking at us while going through a near-silent repertoire of babble. I doubted what I was hearing until I did some research and sure enough, the local jays were known for occasional whisper songs. 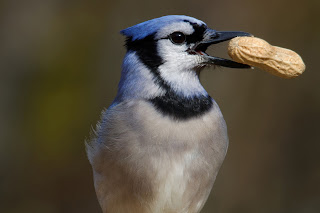 Fast forward to the East coast where I live now. I was on my porch when I heard a very faint Cooper's Hawk call. If you are not familiar with Cooper's hawks, they are deadly to many of your backyard songbirds. They are silent hunters of the forest canopy and subcanopy. They specialize in killing birds. They are especially effective at decimating entire nests of their young. They are also one of the main reasons at the beginning of the fledgling season you see a lot of young birds following their parents screaming for food, and then within a few weeks, many of these young birds disappear.
It took me a moment to realize that what I thought was a distant Cooper's Hawk calling was actually an Eastern Blue Jay in the trees twenty yards away. In California, the Scrub Jays do a near perfect imitation of a Red-Tailed hawk. Whenever I would hear them doing this, I would look to the skies, and usually there would be a Red-Tailed circling overhead. Some believe that this is the way the jays communicate to each other that this predator is nearby.
But this Blue Jay was not only doing a whisper song of a Cooper's Hawk, it seemed to be doing this call to an audience of its three young fledglings. It hopped on a branch by these three birds and quietly did this call. These young birds at the time were being quite noisy with their begging calls. I couldn't help but wonder, was this the parent's way of saying, "Pay attention! Are you listening!! There is a Cooper's Hawk nearby! Do you want to get us killed?!!!" 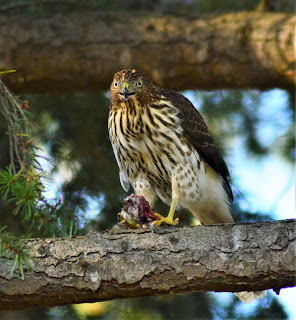 But what does this have to do with ninjas or swords?
Ancestral knowledge, passed down from one generation to the next, with the intent of ensuring survival.
Two years ago I visited the honbu dojo for a week of training. I watched Soke (the grandmaster) Masaaki Hatsumi, teach about sword evasion. It was so subtle, quiet, a whisper song of movement. He hardly spoke. He deflected and controlled the sword at times with only his fingers, a light touch, sometimes just a single finger. At the time I was a green belt, and I understood that he teaches to the level of the 15th dans, so I know there were many levels of teaching that I wasn't comprehending. Still, I walked out of the dojo that day, struck by the value and effect of soft, subtle, and quiet.
There's another whisper of the sword I have encountered as a student of Sensei Roemke. It's the quiet sound that the sword makes when cutting through the air. It's known as tachikaze, which means "sword wind". It's one thing to hear this sound. It's another to create this sound yourself, and it feels sooooo good when you create tachikaze. Sensei Roemke has entire video sets on sword training if you want to venture down the path of tachikaze.
Here's a recent one from our Pathways Youtube Channel where he teaches how to draw and put away a sword.
Ninja Mentor Suggestion
It's hard to find a youth that is not interested in wielding a sword. Grab a nearby ninja youth. Ask them if they want to "learn how ninjas draw and put away swords". Then go make or find a sword and practice these skills that Sensei Roemke teaches with them.
Sword Draw Exercise

Within a few days, the family of jays I observed had dwindled from three young birds to two. I had to wonder if the surviving two had actually paid attention to the Cooper's Hawk warning, while the other hadn't. I also wondered if this evasion technique was ancestral knowledge that has been passed down from teacher to student since as long as there have been jays and hawks in the same neighborhood.
Like avoiding the sword, there are valuable lessons to persevere, but sometimes you have to be listening for the whisper song.
Scroll to top
We use cookies on our website to give you the most relevant experience by remembering your preferences and repeat visits. By clicking “Accept All”, you consent to the use of ALL the cookies. However, you may visit "Cookie Settings" to provide a controlled consent.
Cookie SettingsAccept All
Manage consent